To review the latest limited edition boxset  I had immerse myself into the world of Gamera. All I knew was that Gamera was a gigantic turtle and was created in rivalry to Godzilla, basically a 'rip off' of the king of monsters. Little did I know once I was in too deep with this weird kaiju monster, I would soon turn from sceptic to actual fan of the monster films.

Despite balancing between the ridiculous and pure action, I started to see a pattern in the films, not just the fights scenes between people in costumes, which I started to appreciate more and more as the films progressed, but there were patterns in Gamera's behaviour and its evolution. There was more to this franchise that I initally thought. But this might because I spent a whole week and one very intense day watching all the Gamera films, I may have just convinced myself that Gamera and all its weird ticks are amazing. For anyone wanting to explore the franchise, I would suggest the first film, Gamera, the Giant Monster, then possibly skip the 'vs' films as they are very similiar, and go straight to the 90s trilogy as these are hidden gems in the action film world.

For my full review of the boxset, you can read it over at Vulturehound HERE.

What to Expect From 'The Boys' season two

Ending the last season on cliffhangers all round for the characters, there's quite a bit to expect to unfold in the upcoming season. After the teasers, clips and full trailer, plus the panal from Comic Con @ Home, I've out together what we can expect from season two.

My full article can be read over at Zavvi HERE.

For all those looking forward to the new season the count down begins until September 4th! 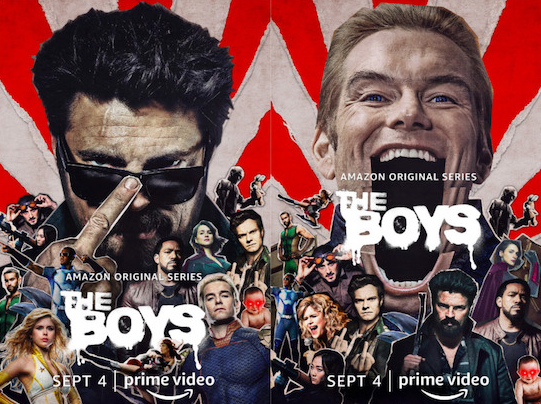 Coming of age can be through many things, not always but usually related to sex. A teenager, or younger or someone in their early twenties, goes through a change, experience or trauma and they come out the other side with a new perspective, a different person, enlightened. But sometimes, the change at first is so small in comparison to everything else going on around the character, but in fact it’s simply a realisation but by no means insignificant. One of the most joyous things about this film is the title, literally nailing this pure feeling of ecstasy and incorporating the oppressed religious aspect of the narrative. And the title is just the tip of the delightful iceberg.

After being accused of ‘tossing a boy’s salad’ at a party, Alice is left bewildered at what that even means as well as an outsider when even her best friend doesn’t believe her. It also doesn’t help that Alice is starting to have sexual urges, even going so far as to go into online chatrooms and finding relief for her desires by masturbating to the sex scene in Titanic. Being part of a very strict Catholic school and brought up in a very Christian home including going to church every week with her Dad, Alice is conflicted by her shame and desire. She decides to attend a religious retreat to try and suppress her urges but after discovering some contradictions in the teachings forced upon her when she finds out what the retreat leaders are doing when no one is watching, Alice starts to see things beyond the rose-tinted rules she’s been told to live by.

Rarely seen in film, let alone teen comedies or dramas, the moment when a teenage girl discovers masturbation, her sexual appetite and the yearning for more exploration. Some films have got this completely on point like in ‘Turn Me on Goddammit’ but ‘Yes God Yes’ portrays this lesser seen moment in film rather well. It’s a strange thing to note that teen films are usually all about the boys wanting sex and the girls are just there as props sometimes willing to join in the fun but having this moment on screen for other teenage girls to see that they are completely normal gives me hope that this is accepted and will be normalised in future films. Including the religious element to the character and her surroundings adds a whole other level to explore.

The flawed teachings of abstinence and how it breeds ignorance and shame is explored but as this isn’t what the whole story is about, it only scratches the surface and focuses more on the hypocrisy of those teaching these rules. Religion is used as blanket reason for everyone’s actions and doesn’t overtly say that everything is wrong but merely shows that you can think differently and in the end you can believe what you want, know your own truths and most importantly, it is completely normal to be a teenager and be sexual active.